What is the Anterior Cruciate Ligament?

The Anterior Cruciate Ligament (ACL) is a thick, strong ligament on the inside of your knee. The role of the ACL is to prevent too much movement of the two main bones of the leg (Tibia and Femur)during walking, running, jumping, and landing.

How is the ACL injured?
The ACL is commonly injured during sports that require you to change direction, jump or come to a sudden stop. Often, an ACL will be injured without contact by another person or object – called a “non-contact injury”. Most commonly, the injury occurs when our knees come towards the mid-line of the body whilst our knee is straight – this places a higher load onto the ACL and surrounding structures.

What are the symptoms of an ACL injury?
An ACL injury will generally result in sudden and intense pain all around the knee. Generally, the knee will swell very quickly and may be difficult to move. An individual that has torn their ACL may feel as though something in the knee has dislocated and come back into place, and they will commonly hear or feel a “pop” in their knee. Walking will generally be difficult for a few days/week. Once walking, the knee will likely feel unstable to walk on. 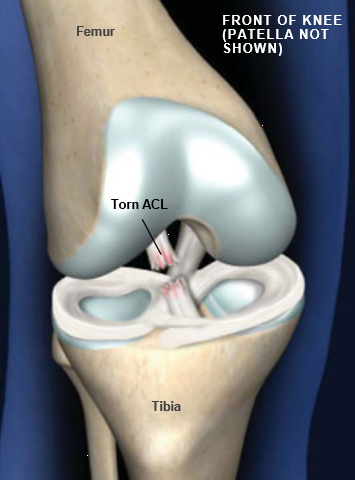